Team Hoyt is an inspirational story of a father, Dick Hoyt, & his son, Rick, who compete together in marathons and triathlons across the country. Team Hoyt Canada was founded in 2015 and is proud to honor the name of The Hoyts.

The doctors told Dick Hoyt that his infant son Rick should be institutionalized. There was no hope, they said, of Rick being anything more than a “vegetable.”

Four decades later, Rick and Dick Hoyt have completed more than 70 marathons, 250 triathlons and hundreds of other events as a father-son team. Rick, whose father was told he was incapable of intellectual activity, graduated from Boston University in 1993. This remarkable pair’s devotion to each other and to their goals has enabled them both to accomplish things that neither would have achieved alone.

During Rick's birth in 1962, the umbilical cord wrapped around his neck, cutting off oxygen to his brain. Diagnosed as a spastic quadriplegic, Rick has cerebral palsy. Yet despite the doctors' grim prognosis when Rick was born, Dick and his wife Judy were determined to raise him at home.

Though Rick could not speak, his parents knew that he was as intelligent as his siblings—and they were eager to give him a voice. With now-familiar perseverance, Dick and Judy raised $5,000 through bake sales and dinner dances and then convinced a group of engineers from Tufts University to build a "communicator" for their son. By tapping a switch with the side of his head, Rick selects letters to form words and sentences. He revealed his athletic leanings with his first words, “Go, Bruins!”

At age 13, Rick finally was admitted to public school. Soon afterward, he told his father he wanted to participate in a five-mile benefit run for a local lacrosse player who had been paralyzed in an accident. Dick was not a runner, but he agreed to push Rick through the race course in his wheelchair. That’s when a surprising thing happened. During the run, Rick felt as though he wasn't handicapped anymore—he was simply one of the runners. This experience deeply affected Dick, and he committed to running an increasing number of events with his son so that Rick could have this feeling as often as possible.

"Team Hoyt" began competing in earnest in the late 1970s. At first, other competitors often treated them as outsiders and even avoided them. But gradually, what began as a way for Rick Hoyt to experience inclusion and equality broadened in its purpose. Running together became a way to send a message that, as Rick said, "everybody should be included in everyday life."

The duo's first Boston Marathon in 1981 yielded a finish in the top quarter of the field, and shortly thereafter, attitudes began to change.

"In the beginning no one would come up to me," recalled Rick. Now, he says, "many athletes will come up to me before the race or triathlon to wish me luck."

Dick has run, ridden and swum literally thousands of miles to be with and support his son. Their athletic pursuits have enriched Rick’s life and had a tangible benefit for Dick’s life as well: After a mild heart attack, Dick's doctors told him he might have died 15 years earlier if he weren't in such good shape.

Team Hoyt's total commitment to each other and to what they do ensures that they challenge themselves constantly. In addition to their athletic events, the Hoyts tour the country to speak about their experiences. They also have established the Hoyt Foundation, which seeks to help integrate young people with disabilities into everyday activities so they may live fruitful and productive lives.

The 2013 Boston Marathon was the 31st time the Hoyts have run the race, and it was going to be their last. Just a few days before the marathon, a bronze statue of the Hoyts, titled “Yes You Can!”, was unveiled near the starting line. After the race was disrupted by the Boston Marathon bombings, the Hoyts vowed to come back one more time, in 2014, because nothing will stop them from achieving their dreams—together.  Today, Team Hoyt carries that same tradition in Canada! 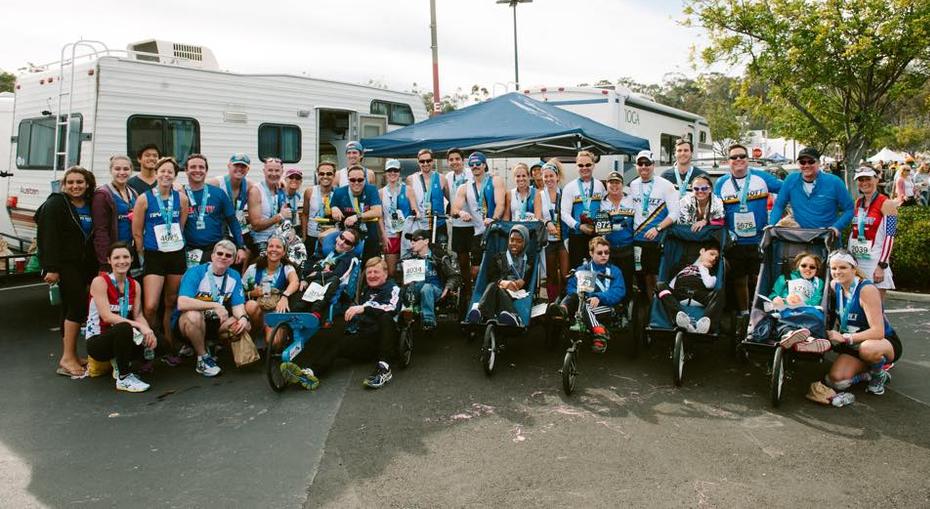 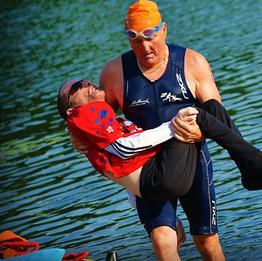 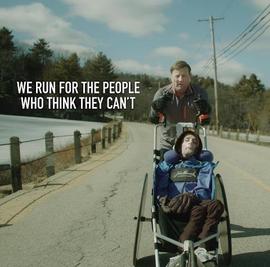 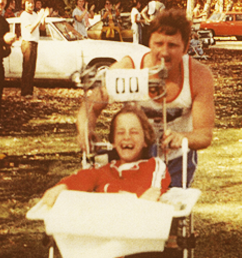 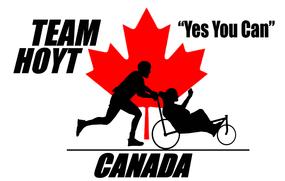 A bronze replica of the inspiring father-and-son team meters away from the starting line of the Boston Marathon.

Spring of 1977 Dick and Rick ran their first 5 mile race...coming in second to last but not last.